Go to Content | Go to Main Menu | Go to Search 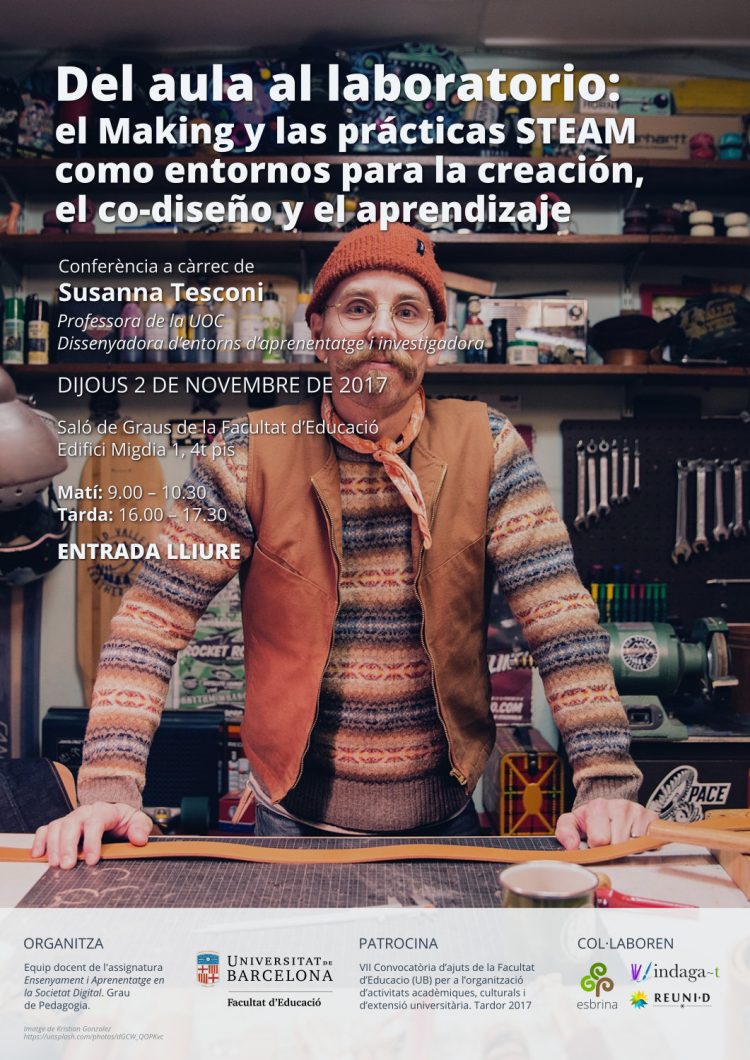 Cultural centers, as well as centers of art and research and education, devote part of their efforts to become educational resources that are pedagogical tools, spaces of experimentation and discovery guided by the desires of the people who compose them and participate in their proposals.

It is an approach that responds to learning processes based on discovery and self-motivation. Researching and wanting to learn about what we are interested in replicates the creative process that inventors, artists, curators, researchers, and creators face in their projects: to seek information and design methodologies and tools to construct their own narrative about a theme.

The seminar / lecture is proposed as a space for reflection on the laboratory, maker spaces and STEAM environments as opportunities for collective creation and learning. After contextualizing education based on making and DIY, and based on the experience gathered in the text “From the classroom to the Laboratory” the participants are invited to generate ideas and ways for the conceptualization of laboratories in environments education.

Her work is inspired by the interaction between learning processes and technology, with the aim of accompanying people in the process of developing their own devices, tools and environments. Since 2010, she has designed and implemented laboratories and educational programs related to the design of Interaction and digital manufacturing for different institutions such as ​LABoral​ ​Centro​ ​de​ ​Arte​ ​y​ ​Creación​ ​Industrial​ ​(Gijón),​ ​TUMO​ ​Center for​ ​Creative​ ​Technology,​ ​Armenia,​ ​Tabakalera-Centro​ ​Internacional​ ​de​ ​Cultura Contemporánea​ ​(Donostia),​ ​Museu​ ​del​ ​Disseny​ ​de​ ​Barcelona,​ ​BAU,​ ​Centro Universitario​ ​de​ ​Diseño,​ ​Barcelona​ and​ ​Fundación​ ​Orange.

The practice of designing learning environments is accompanied by a research process on the potential of making as a teacher training tool, carried out with his doctoral thesis in the Department of Applied Pedagogy of the Autonomous University of Barcelona. Since 2014 she is also an integral part of the Fablearn Fellowship, powered by the Transformative Learning Technologies Lab of Stanford University, a group that works on designing environments for fab labs’ and makerspaces’ educators.

She is currently professor of Computer Science, Multimedia and Telecommunication Studies at the Universitat Oberta de Catalunya.